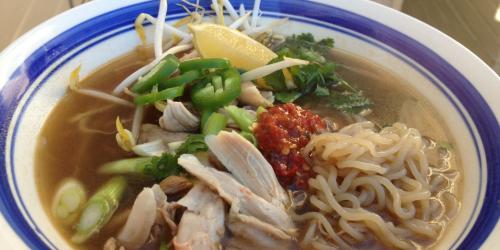 We all ate and ate: mass amounts of creamy Brown Butter-Pumpkin Mac and Cheese, rich stuffing, velvety pumpkin pie and a million different kinds of crispy, creamy, browned, meaty comfort-food-y things. I wouldn't trade it for the world.

That said, this week's approach to food is going to have to be a little lighter, if I am hoping to continue to wear my pants through the holiday season. With that in mind, I decided to make pho--the spicy, deeply flavorful, soul-hugging soup of Vietnamese origin, in which noodles swim (I used low-calorie shirataki noodles--usually found near the tofu in most grocery stores--to make further atone for last week's caloric intake, but rice vermicelli is what is traditionally called for), and atop which fresh, toppings, like scallions, bean sprouts and cilantro dance, waiting to be stirred in.

Note: This soup also happens to be a fantastic way to use up that leftover turkey you've been plowing through for the past few days. Simply use the turkey carcass to make the broth, and shred cooked turkey meat to use in place of the chicken meat called for.

I wish I would have seen this before all our turkey was eaten up.

Try it with chicken!

Wow, I have always wanted to make this at home, now I can….thanks for the recipe!!

Two questions: I assume there’s supposed to be water or some kind of broth added. How much and broth or water? Second, where do you use the lemon juice? Thanks!

Hey Michael! Sorry for the error—I’ve fixed the recipe to answer the questions you had. :)

We make chicken pho quite often. Julie will even use chicken stock she’s made from an old, roasted carcass. I just saw your tweet referencing this and leftover turkey and had wished I saw it before we ate up all our turkey.

Thanks so much for the update! I absolutely love your recipes and wanted to try this one soon, and just wanted to check to make sure. I can’t wait!

I want to thank you for this informative read; I really appreciate sharing this great.

When 2008 drew to a close, many analysts had then predicted 2009 to be a slump year for the various auto players, not just in Malaysia, but worldwide