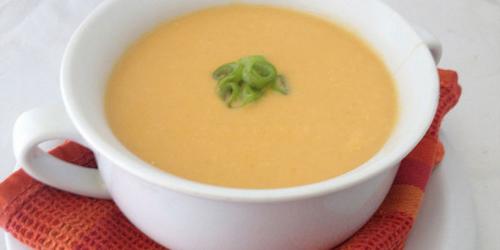 You may recall that I am of the somewhat unpopular opinion that regular, starchy potatoes aren't all that great. It's not even a health thing; I just don't get what the fuss is all about. I mean, sure, if they're covered with cheese and other flavorful stuff I can get into them, but even then, it's in a, "hmm, this potato is a viable vehicle for these other things I'd like to put in my mouth right now," not in an, "OMG, please smother me with buttery potato starch immediately" kind of way. They just don't do very much for me. I'd rather have sweet potatoes any day.

So when I got a bushel of beautiful leeks in my CSA box this week, I knew I wanted to make a creamy leek soup, and I also knew that regular potatoes wouldn't be involved. Enter this bowl of farm-fresh magic. 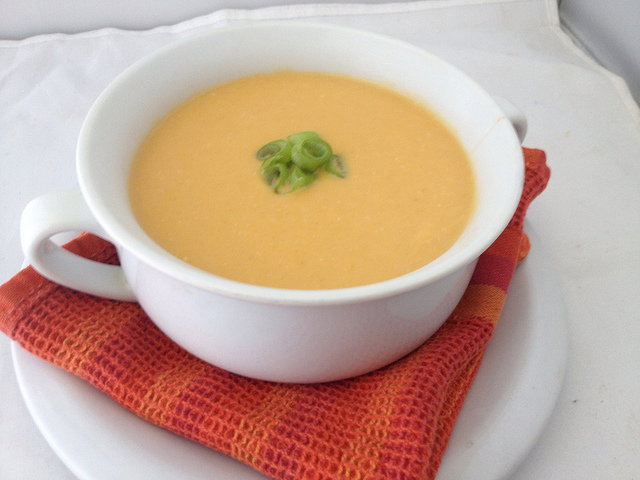 There is very little to this soup, and yet, thanks to a few simple techniques, it tastes like much more than the sum of its parts.

And speaking of techniques, whenever you work with leeks, it's very important to clean them well. I do this by soaking them in a bowl of cool water for 10 minutes, and then rinsing them several times until they're completely free of grime. 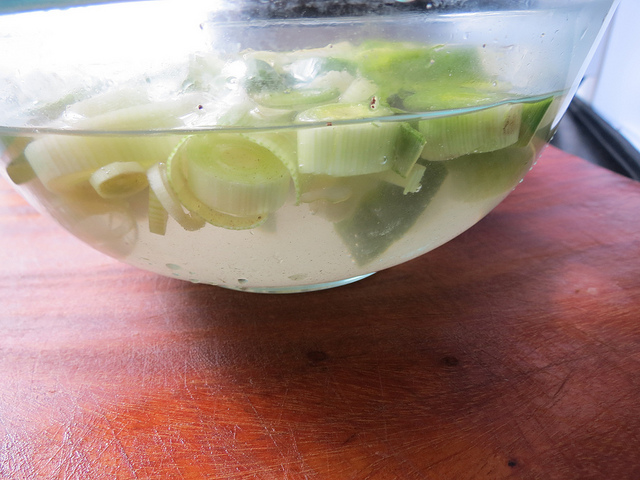 Next, they get melted down in a generous amount of butter until silky and soft, then cooked with sweet potatoes and water. I really could not be easier.

The resulting soup is ultra-creamy, but not heavy as with traditional potato-leek soup. Since I always have half-and-half on hand (for coffee, and every other time I need a creamy element in a dish), that's what I use here, but if you happen to have milk or heavy cream in your refrigerator, any of the above will work. I've even seen a similar soup prepared with soymilk.

I like to reinforce the oniony flavor of the leeks by garnishing each bowl with thinly sliced scallions or chives, but a shower of chopped fresh parsley or thyme would also be lovely.

As a sidenote, if you don't already own an immersion blender, I implore you to consider buying one. They're relatively cheap, and beyond making pureed soups a snap, they're also great for sauces, smoothies, hummus, mincing garlic, onions, ginger and fresh herbs, whipping cream, and so much more. If you have limited funds and limited space in which to cook, this is an investment you should absolutely make.

I think I love you just a little bit more for feeling the exact. same. way. I do about potatoes. Excellent vehicle for cheese and bacon and other deliciousness, but just yuck on their own. You’re definitely not alone, and that soup looks amazing. I adore sweet potatoes and can’t wait to try it!

It is really an amazing and powerful meal for those who love soups and it is also good for the patients who feel weakness by their disease they have to get this meal which will give them a powerful energy by which they will get well soon and get their routine works easily it is very yummy in taste and also good for the health.