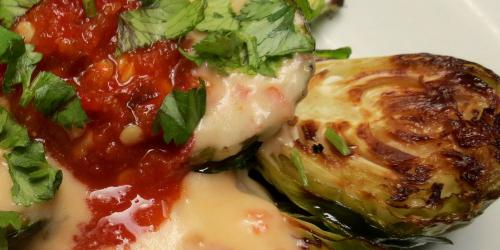 There are two conversations which my parents (who have been married for 31 years and have one of the best relationships I know of) have with enough regularity that I can usually mouth along with them.

The first happens every Passover, while we are preparing for Seder at their house. My mother pulls out the Seder plate we've been using for the past million or so years and attempts to arrange the Passover symbols in their proper places. This involves reading Hebrew--something my mother doesn't know how to do.

So, she summons my dad, who does read Hebrew, to join her in the kitchen and help. He happily agrees and they set about trying to figure it out. The scene that follows is always the same and always hilarious to witness: inevitably, my father can't figure out one of the spots, and my mother insists she knows what it is, which, of course she does not (though, neither does he). "You don't read Hebrew!" my dad insists. "I've been doing this for 31 years!" my mother retorts. Eventually they figure out what needs to go where by process of elimination, while my brother and I snicker, because it isn't Passover until this happens.

The second scenario happens with a bit more frequency: the subject of vegetables comes up--either because we are eating them or because we are talking about food (which we are pretty much always doing). My father professes to like vegetables. Like clockwork, my mother laughs and says, "yeah, if they're covered with enough cheese sauce!" He denies this, she rolls her eyes. We all laugh.

I happen to love vegetables, even without cheese sauce. But I gotta tell you, this cheese sauce could convert even pickiest of supposed vegetable haters.

Hey I just wanted to say that is the loveliest story I’ve heard in aaaaages (the story about your parents arranging the symbols). I can just see them arguing, and I know what you mean about it not being real until the argument happens:-)