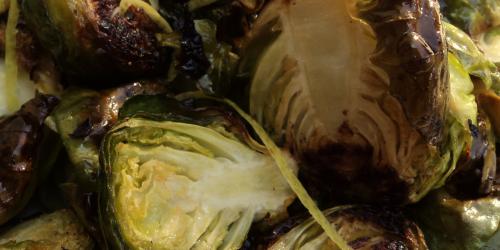 I’m beginning to notice a trend in the dates I’ve been going on lately:

Shortly after drinks have arrived and an appetizer has been ordered, my companion gazes into my eyes and then confesses that his mother was a terrible cook. Maybe she overcooked food to the extent that it was unrecognizable. Maybe she boiled the color and flavor out of every vegetable to grace her kitchen counter. Perhaps her idea of seasoning was to smother everything with Lipton onion soup mix. Whatever the individual shortcomings of these hapless home cooks, there seems to be one culinary failure that they all share: the cooking of the Brussels sprout. The end result of this infraction being that my potential Mr. Right (or Right Now, as the case may be) passionately hates Brussels sprouts.

While I appreciate a man enlightened enough to trace his adult tendencies back to childhood, I won’t stand for the bashing of the innocent Brussels sprout. So often is the case that this lowly vegetable is boiled beyond oblivion and then smothered with butter (or worse, margarine), and placed before a young and impressionable palate. If you, too have been scarred by a badly-cooked Brussels sprout, clearly you are not alone, but I think it’s time to quit the complaining and start cooking these beautiful babies the way they are meant to be served.

Splitting and roasting the sprouts is the key to cutting their bitterness, while the classic combination of garlic, lemon, olive oil salt and pepper makes them so much more than a side dish. These are healthy, easy to make, quick to make and, like all of my BrokeAss creations, cheap.

I love roasted brussel sprouts. They are like nothing else you will ever taste. I especially enjoy the crispy outer leaves. Add some kosher salt and they’re addictive.

leaving a comment because i’ve never cooked with brussel sprouts but have strangely negative feelings towards them… will try them out and let you know what happens!

AHH! I always assumed brussel sprouts could be in good in theory, but that it must require a lot of work or fat or both…SO excited to be proven wrong! Can’t wait to pick up some brussel sprouts!

made these last night. Love the flavor the garlic and lemon give them. I usually just roast mine w/ a bit of oil & S/P.

so easy and healthy!

I have been making my brussel sprouts (and broccoli) this was for years! So yummy!! Make sure to add some kosher salt and be willing to play with the lemon juice a bit. I promise this will forever change how you view brussell sprouts!!

Omigosh! I cooked these tonight with dinner and they were delish :) Having discovered your blog, you can bet you’ve got a new follower!

I like brussel sprouts anyway, but these were amazing! I added some fresh cilantro, which made them even better!

This one comes in a solid tantalum case with dial bridges in black sapphire. To some it is boring, to others it is sci-fi. Our Editor-in-Chief Ariel Adams puts one on the wrist, so let’s check it out.