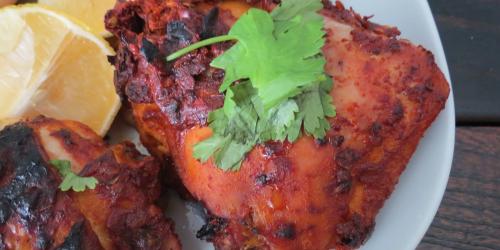 Tandoor ovens, perhaps best known for their role in cooking naan and Tandoori chicken and fish, are a mainstay in Indian and Pakistani homes and restaurants. They get extremely hot and are used to quickly cook food, often charring it a bit in the most pleasant of ways.

I don't have one in my tiny apartment kitchen, but that's never stopped me from making my own naan, and, feeling inspired by some delicious Pakistani food I had recently, I decided to put a tandoor spin on roast chicken.

As you know, I'm a big fan of roasting chicken at a very high heat, yielding a crisp skin and tender, juicy interior. Since this is in a similar vicinity as tandoor, cooking, I figured that if I applied Tandoori flavors to chicken legs before roasting them at a high heat, i I could get a similar result to traditional Tandoor chicken. Though the skin is typically removed before roasting in the case of Tandoori chicken (and you can feel free to do so if you prefer), I decided to leave it on, because as far as I am concerned, crispy chicken skin is the new bacon.

I started by making a marinade of spices (look for these in Indian specialty grocery stores like Vik's--they're amazingly cheap when you buy them in bulk!) and yogurt (regular whole milk yogurt, Greek yogurt, plain soy yogurt, or plain coconut milk yogurt all will work), which my chicken legs bathed in overnight (though you can still get delicious chicken if you only have an hour to marinate). The chicken and onions went for a nice long dip. 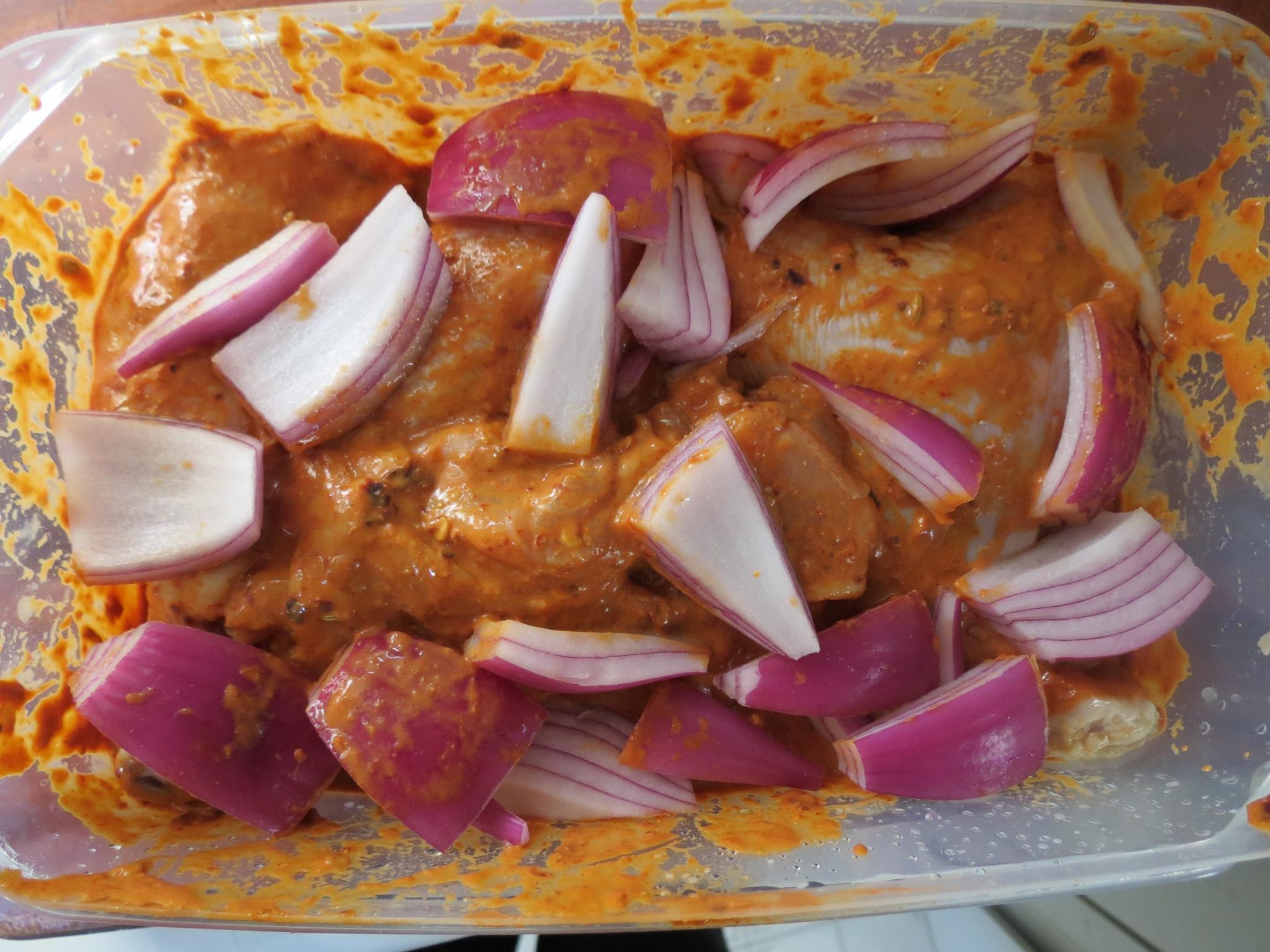 After tenderizing (the calcium in the yogurt activates enzymes in the meat which breaks down the protein, keeping it ultra-juicy after cooking), the chicken and onions get roasted, just like with regular baked chicken, and that's when the magic happens. The spices impart a deep, dark red color, the skin crisps, and the onions get all charred and roasty. 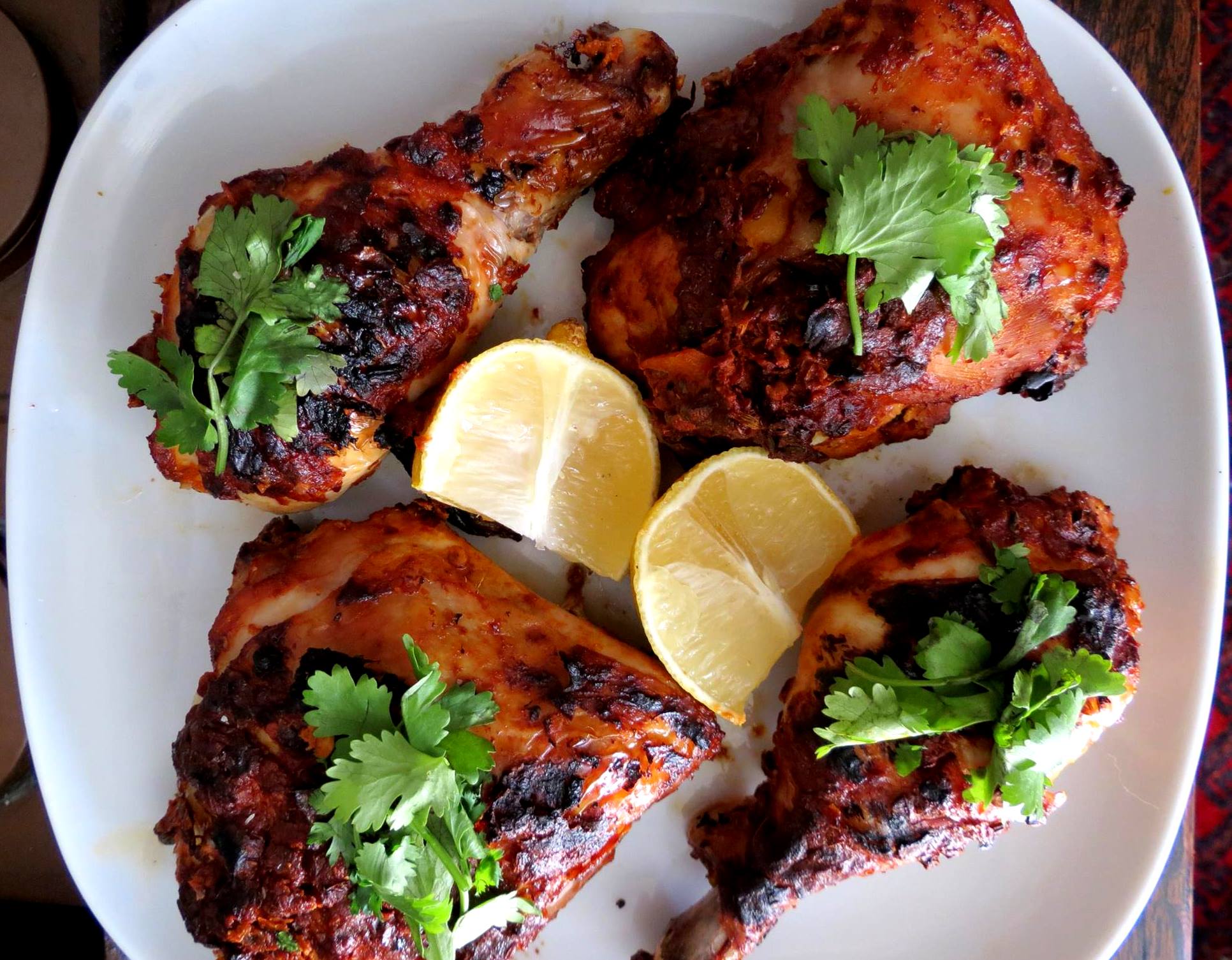 The lemons and cilantro aren't required, but they do add an amazing pop of freshness. Serve this one with homemade naan (I made my new favorite kind -- chickpea flour!), and a crisp green salad or slaw.

I love Tandoori chicken and this at-home version looks really flavorful and yummy!

Ana, one option might be to use the leftover sauce to make a second, smaller batch of tandoori chicken! The important thing is that it gets cooked so the chicken juices are edible :)

I followed the directions but couldn’t quite get the skin to get crispy – it was more mushy and rubbery than anything. It looks nothing like what’s in the picture. What did I do wrong? How much marinade should be on the chicken when baking it? Regardless it was still damn good. Oh, I also added sliced yellow and red peppers on top of the chicken while cooking and that was a very nice flavor addition.

This sounds so delicious. Thanks for sharing this recipe.

This is great will try it out

The most dominant custom assignment writing service providers. They serve an enormous number of people all around the world. Students from any educational backgrounds facilitate themselves with our contents of excellent quality.

love tester One needs to be sheltered, one is free-shoulder
A person whom you accept to use your whole world to trade.

I enjoy reading all your articles.

HAVE YOU LOST YOUR HARD EARNED FUNDS TO THE WRONG HANDS??
MEET THE PROFESSIONAL HACKERS FOR HIRE TODAY.
⏱ 1min
Hiring a professional hacker has been one of the world’s most technical valued navigating information. leroysteckler@gmail.com
Regarding:
•Recovery Of Lost Funds,
•Mobile Phone Hack.(Catching A Cheating Spouse).
•Credit Score Upgrade,
•Email Hack.
•Uber free Payment. High prolific information and Priviledges comes rare as it has been understood that what people do not see, they will never know. One of the affirmative ability to convey a profitable information Systematically is the majoy factor to success Welcome to The GlobalKOS hacking agency where every request on hacking related issues are fixed within a short period of time. For more infomation and profound Hacking services,
Visit: leroysteckler@gmail.com.

It is a delicious recipe. I have used greek yogurt.

I enjoy reading all your articles.