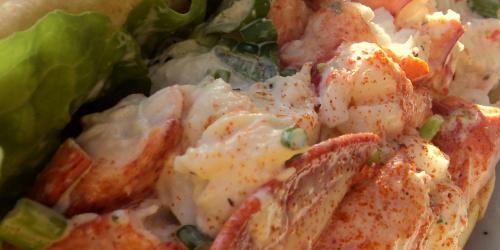 Before I moved to San Francisco in 2005, I lived in Boston, MA, where I had attended college. While I am, without a doubt, a true California girl, I occasionally find myself missing the city’s cobblestone streets and straightforward citizens. Mostly though, I long for summer in Boston.

I know, weird, right? Summer in Boston is hot and humid and it’s nearly impossible to sleep through the night if you don’t have air conditioning, but, for me, it was also when the city came alive. Notoriously Seasonal Affective Disordered Bostonians became happier with the constant sunshine and could be found out and about enjoying their city every day, as opposed to bundled up inside as per the rest of the year. And there was nothing— nothing —better than a Boston summer evening spent walking along the water. It wasn’t until one such magical summer that I discovered the Northeast’s favorite summer sandwich: the lobster roll.

Fresh Maine lobster salad tucked into a fluffy grilled bun with a few leaves of Boston lettuce…it was summer eating at its best. Now, thanks to my friends at Overnight Lobster, I can have, in addition to fresh live lobsters, cooked lobster meat at a ridiculously low price, delivered straight to my door.

So here I am, in the middle of the day on a Thursday in November in San Francisco, reliving Boston summer nights. I just wish I had a cold bottle of Sam Adams Summer Ale to go with it.

Roughly chop the lobster (you’ll want to keep the pieces somewhat large) and transfer to a bowl. Stir in mayonnaise, lemon, scallions, paprika and salt and pepper to taste. Refrigerate covered until ready to use (but no longer than an hour).

If you were unable to find New England style hot dog buns, simply use a serrated knife to gently slice a very thin piece of the rounded top and the flat bottom off of the regular hot dog buns so that the fluffy white insides are exposed.
Lightly butter the tops and bottoms of the rolls.

Heat a frying pan over medium heat and grill the buns (as you would grilled cheese), just until toasted and golden on both sides.

To serve, line the toasted buns with the lettuce leaves and divide the lobster mixture between the two buns. Serve immediately.

Hey Gabi- I was born a d raised in Boston and moved to San Francisco about 20 years ago-I really miss Boston also-I got to go back last month for my reunion.
Anyway wanted to let you know that Sams Chowder House in Half Moon Bay has a great Lobster Roll

These are also very popular in PEI. I swear I ate one everyday while on vacation there a few summers ago. Thanks for the recipe!

…and its not even a REAL lobster roll.