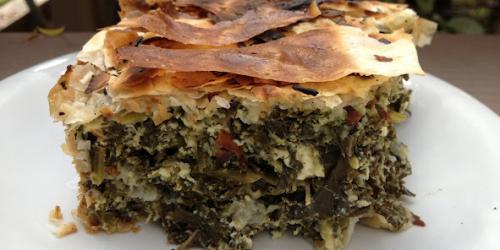 This spanakopita (Greek for "spinach pie") recipe is adapted from one by my friend Rebecca Kee, mother of James and one of my closest friends. Adapted from her own mother's version, this recipe became a regular in Rebecca's house when, during her current pregnancy with the second as-yet-unnamed Kee boy, she found herself overcome by a total disinterest in vegetables. Knowing that giving up greens while eating for two was simply not an option, Bec began making this easy Mediterranean classic once (and sometimes twice) weekly. It was an assurance that she would be eating several helpings of dark, leafy greens (plus a decent amount of protein) every day--in a feta-laced, crispy phyllo vehicle.

After a recent afternoon of spanakopita and gossip at her kitchen counter, I finally demanded the recipe. She obligingly whipped out her iPhone and emailed it to me immediately, along with a link to her post about it on her own blog, Kee Kitchen.

Oh, and this fabulous green pie is huge and very filling--great for feeding a big group, or one or two people for several days in a row. It's the perfect thing to keep in the fridge during a week as busy as this one, allowing me to work all day without stopping for more than a few minutes to cut and warm up a square when hunger strikes.

Love this! How simple, nutritious and perfectly easy! We’re going to feature this on our Facebook page and link here so people can see how you made it. If you wish, come LIKE us on Facebook for more recipes and tips on greens like kale, chard, beet, mustard, turnip, collard, escarole, dandelion and other green leafies. https://www.facebook.com/Cut.n.Clean.Greens

Yum, I love spanikopita :) Thanks for the reminder, I should make it again soon

Do you know how much chopped Kale I should use if I wanted to substitute fresh Kale?

I’m using fresh spinach and fresh kale – what should I do differently?

The movement is actually an automatic – which I found surprising given the fact that it needs a lot of space for the moving music box disc and blades.

thank you very much!