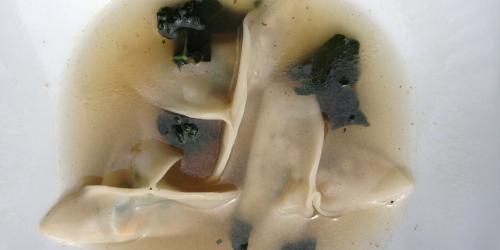 You may have clicked on this link, thinking I was referring to Marilyn Monroe. I'm not. But don't go away--this is even better.

Full disclosure: I am pretty sure my grandmother never actually made kreplach (Eastern European dumplings, boiled or fried, filled with either meat or cheese). Traditional kreplach are pretty work-intensive, as you must mix, roll and cut the dough, and make the filling from scratch. Grandma's kitchen style tended toward the less-is-more school of thought, when it came to prep. Once, when I was about twelve years old, I watched her cover a lasagna with pre-shredded cheese. I had never seen bagged, shredded cheese before.

"How come you don't grate it yourself?" I inquired.

"Because, sweetheart, I have better things to do with my time than grate cheese," she answered, pinching my cheek. I saw her point: spending time with me was definitely more fun than grating a block of mozzarella.

Though my approach tends to be the opposite of hers (I'd rather do more work and spend less money), I've had Grandma on my mind recently, so I decided to take the Marilyn approach to homemade kreplach: fresh, simple filling made from cooked chicken, onions, garlic, parsley, dill, salt and pepper stuffed into eggy dumpling wrappers, rather than the traditional fresh, eggy, time-consuming noodle dough. I floated them in simple, seasoned chicken broth with a bit of sliced, wilted kale, and nobody suspected the meal was made from anything less than scratch.

Wasn't she beautiful? My grandfather was a looker too. 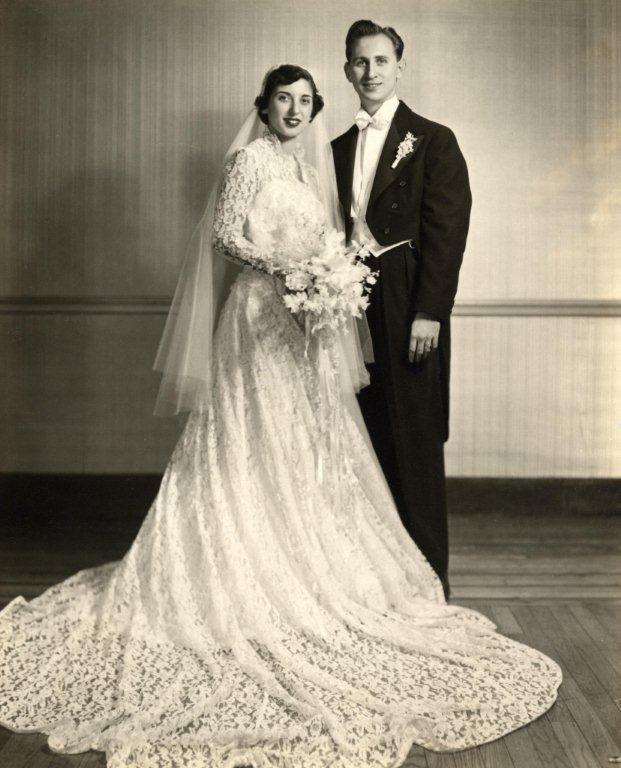 The recipe is easy. First, you mix up the filling: 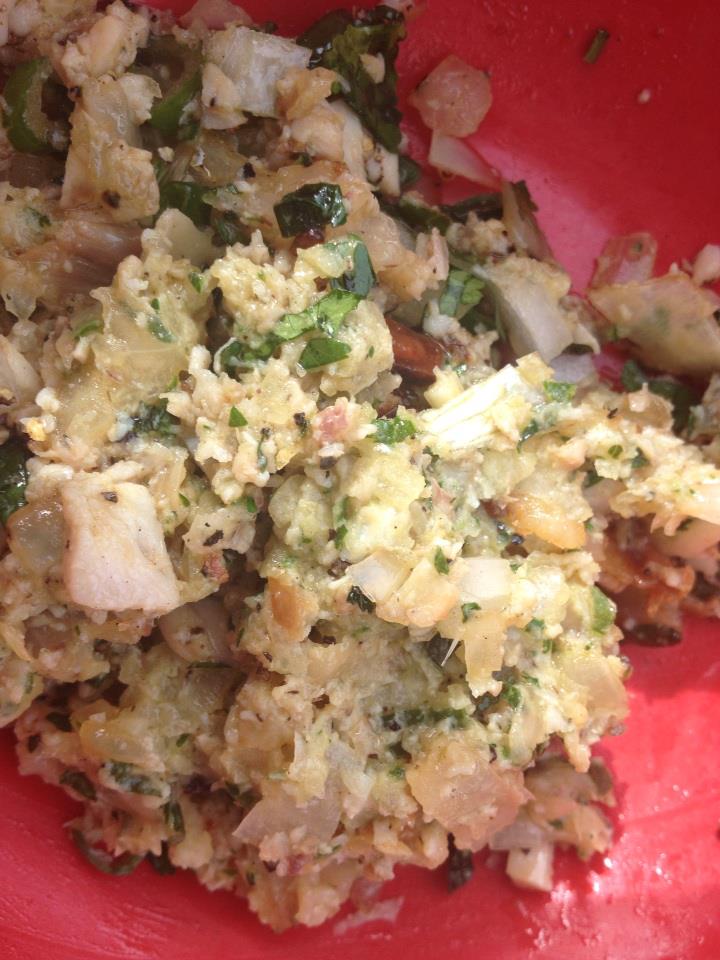 Then put a little on a dumpling wrapper: 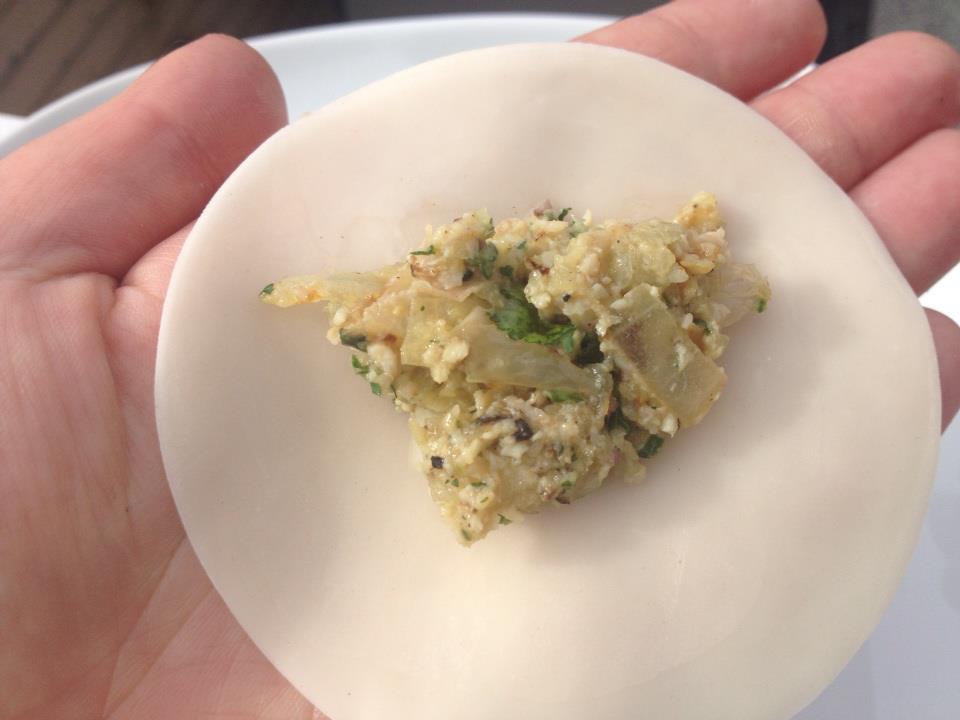 Dab some water on the edges, then fold one side in like so, making sure to seal tightly: 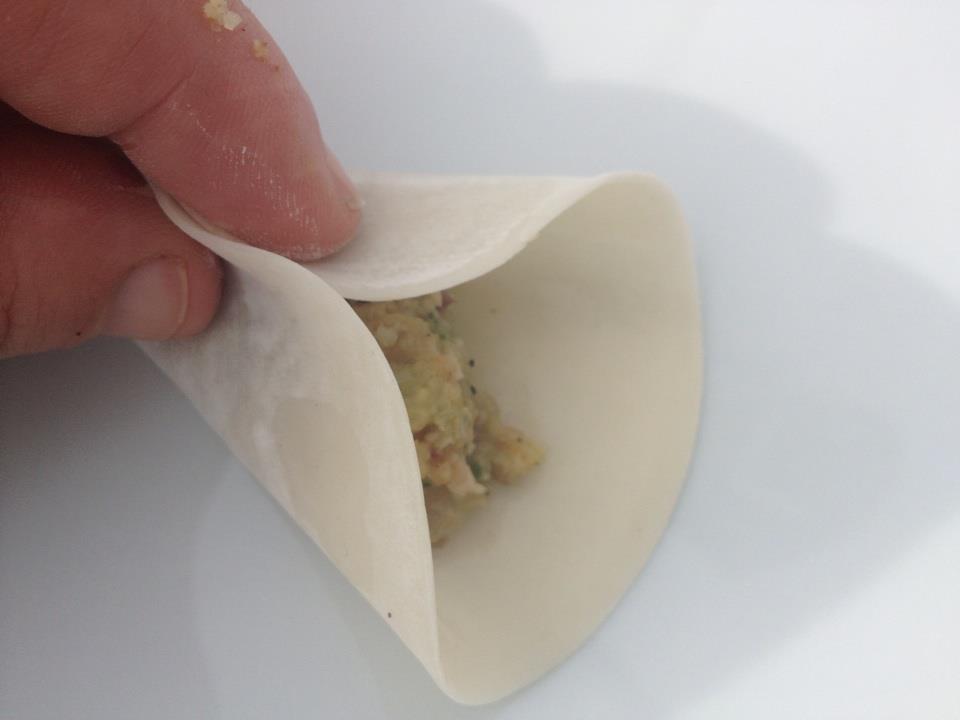 Seal all the edges so it looks like this: 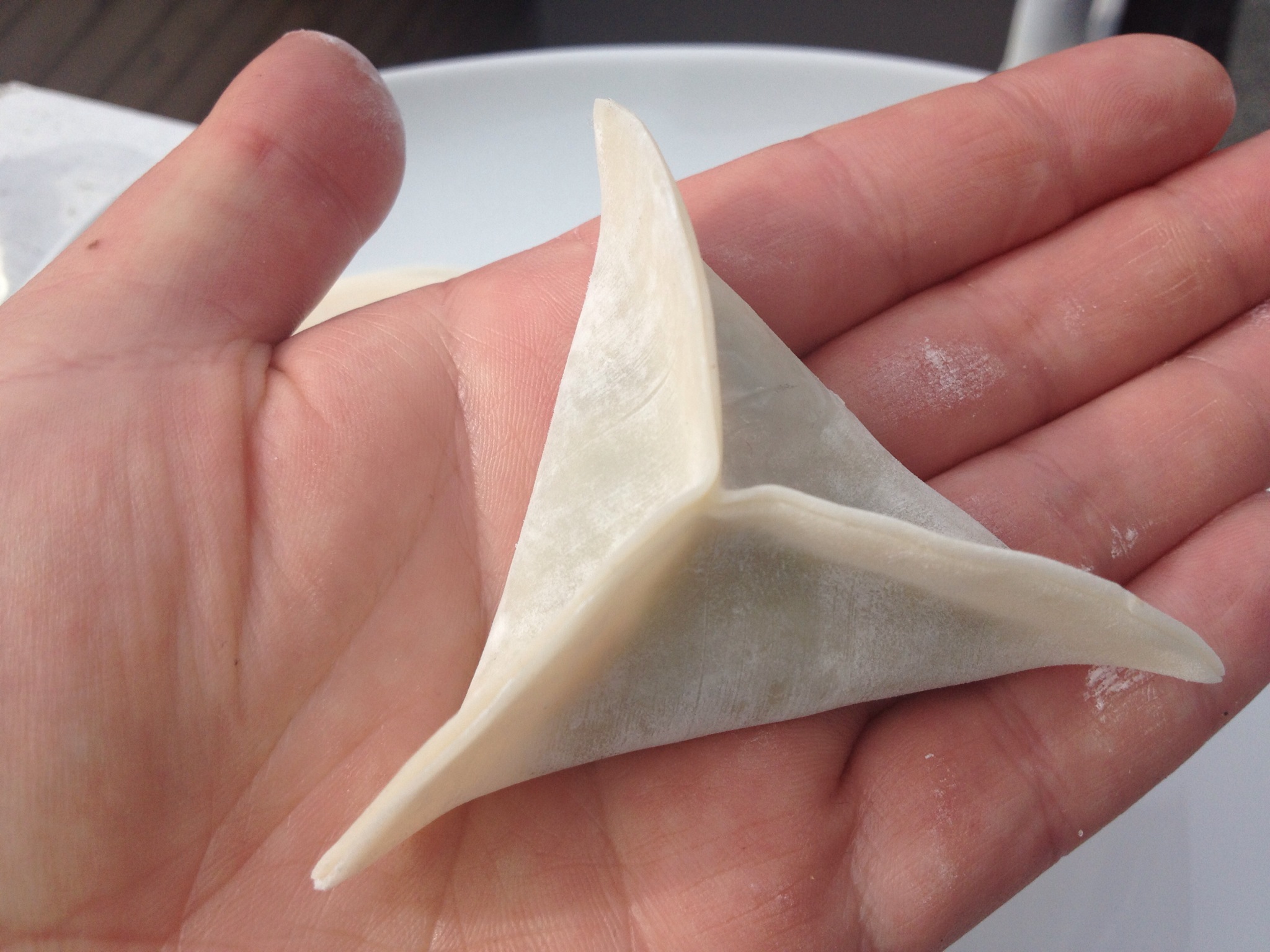 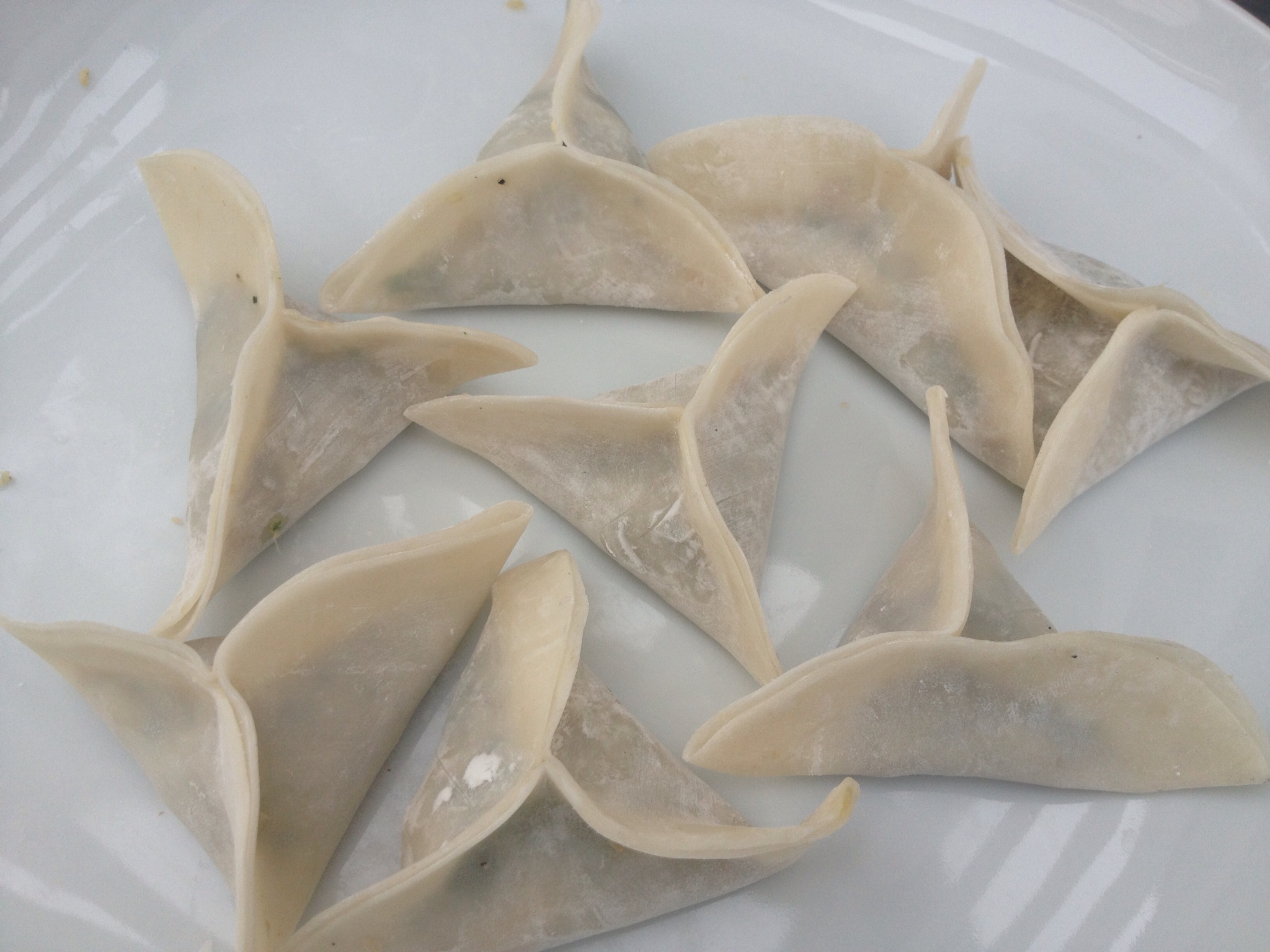 Cook them in chicken broth with sliced kale: 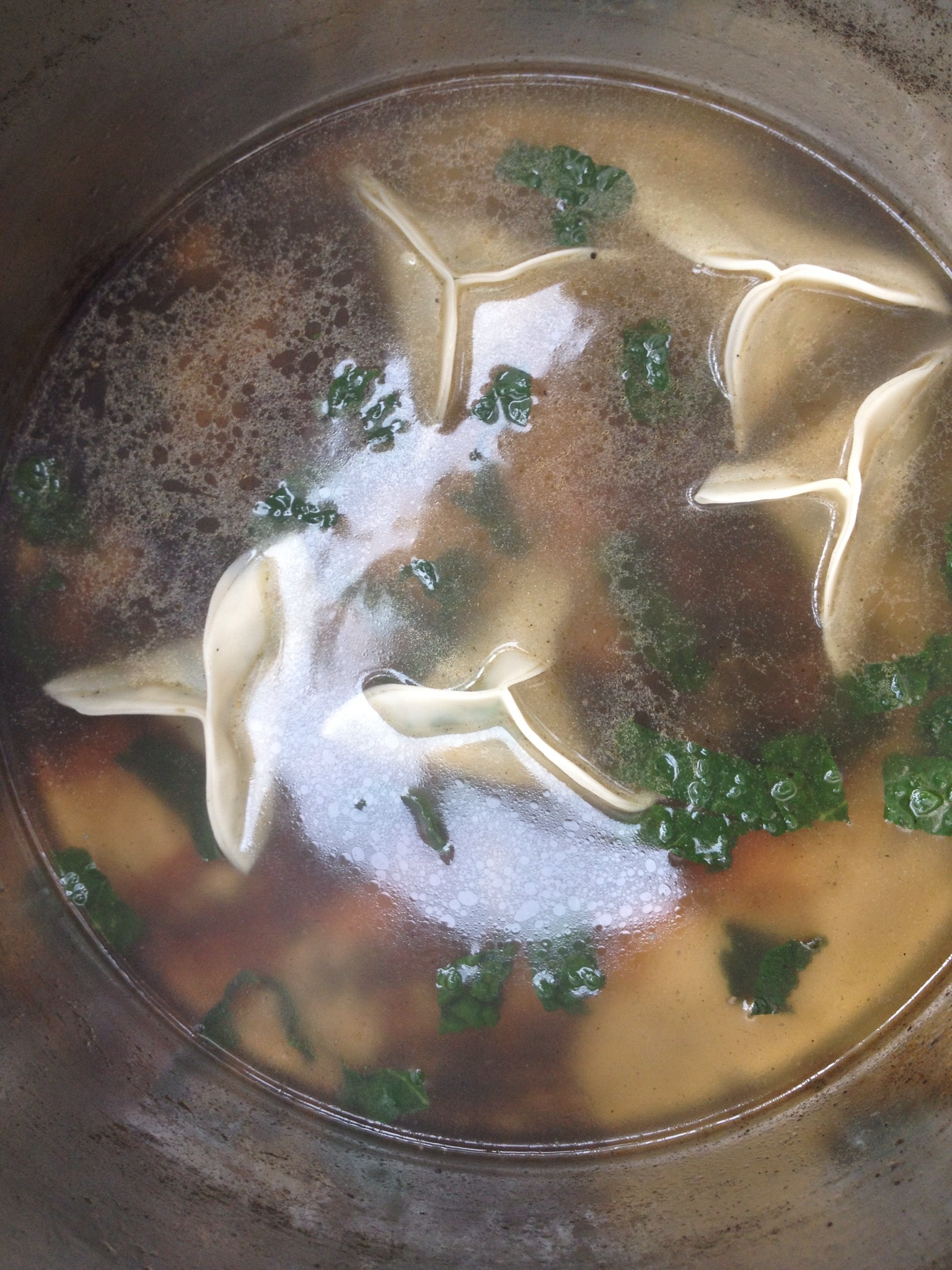 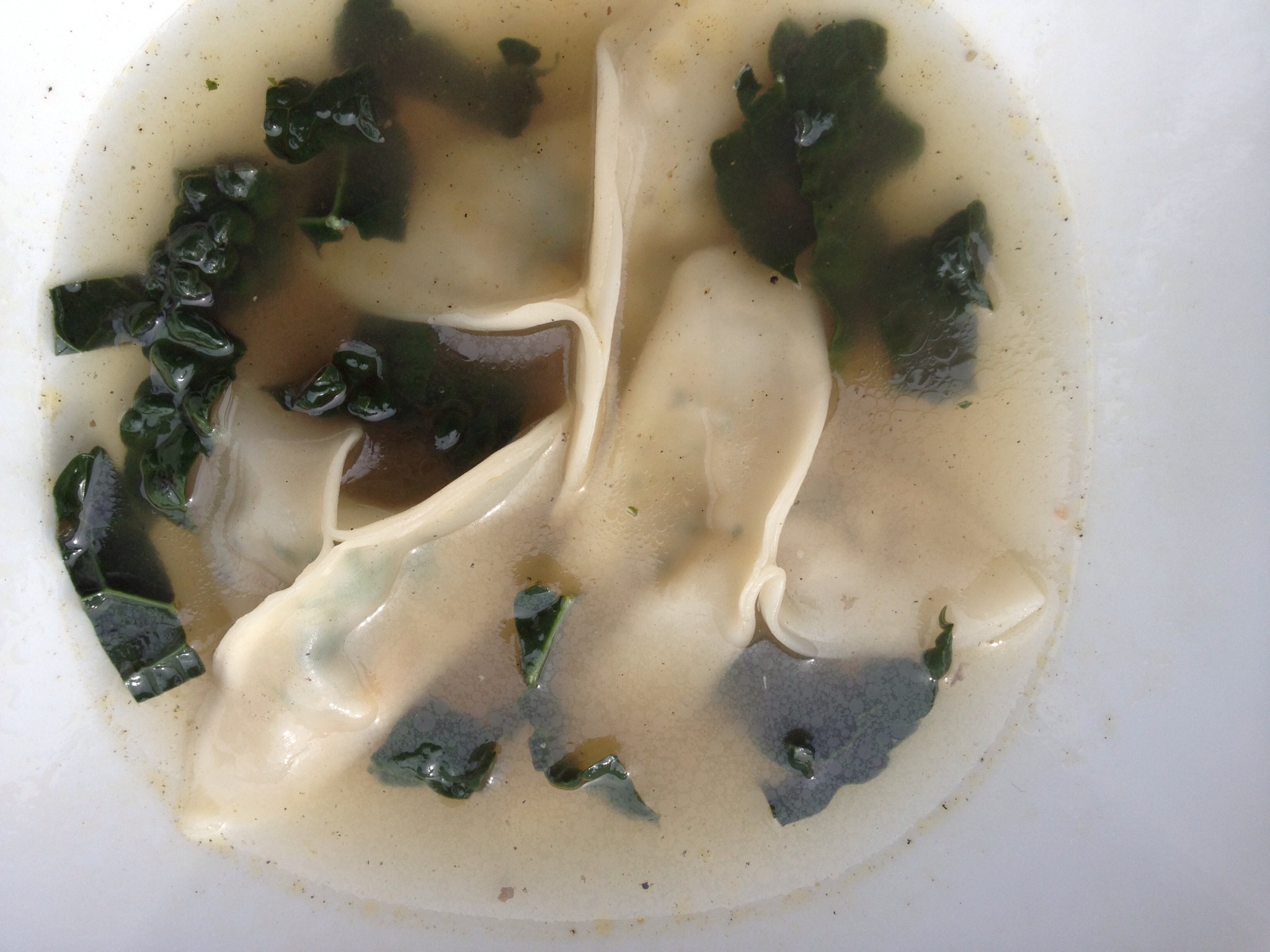 I must tell you how much we enjoyed your story about your grandmother and her influence on you to this day. We have tried this recipe and it works! Better than works..it is wonderful.
keep cookin’
prof

These look amazing, even though I’ve never heard of them, and your recipes have never failed me; they’re on the menu for this week. Loved the story, too. We went home for Christmas this year, and I wanted to make pretzels – much to my surprise, my grandmother only had instant yeast, and I needed traditional. She’s too busy to wait for bread to rise. :)

my sister really love these stuff

This recipe has me chomping on my hands – even though I just ate!! I love any kind of dumplings, so this is a must-try for me.

Your grandmother’s wedding dress is stunning, by the way. She had great taste!

YUM!!!
Your grandmother I mean. :)
Thanks for a lovely story and a great recipe.

Love your granny’s story.
Spending time with our beloved some is the best part of our life time.
And think that I should try this recipe, too.

FYI, your granny’s pic is so meaningful, same as mine.

what a lovely recipe, and story :) I love dishes like this with simple ingredients that need love, attention and a lot of skill to turn into something special!

I love that, not only is this post about food, it’s about family. The Kreplach looks amazing by the way. I think I’m going to have to try this! Thanks :)

I tried your recipe tonight (replacing the dill with basil and the chicken with Italian seasoned seitan). Wow, I’m really impressed. I was worried the filling would just fall out into the bowl as we ate, but was surprised by how well the contents of the wontons stayed together. The few bits that did fall out helped season the broth.

Next time, I’ll be adding cheese (perhaps a decent melting goat cheese) to the wontons. The bits that fall out would add some real character to the broth (thickening?).

It should be noted that pick-ups here included the likes of the Isuzu D-Max, Mitsubishi Triton, and Ford Ranger. Figures from MAA also listed a pick-up model from Proton, which sold a total of 287 units.