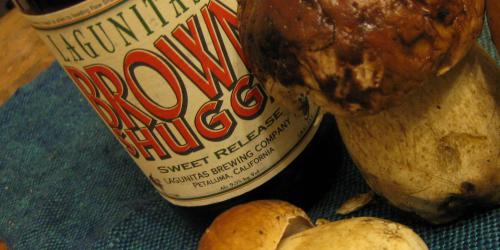 Beers are like mushrooms. Different kinds come and go throughout the year, following the seasons, each appearing and vanishing as the months make their way through the calendar. Now, as Lagunitas Brewing Company’s phenomenally strong, delicious, and (so call me cheap) cheap Brown Shugga’ dwindles, its successor arrives: Olde Gnarley Wine Barleywine – and just in time for the spring Agaricus bloom.

Brown Shugga’ is a beer worth loving. It is dark amber, sweet, brewed with brown cane sugar, and runs about 10% ABV. Among beers, it’s an oddity, and the story behind it is as good as beer stories get. It was the winter of 1997 and the Petaluma brewery was in the midst of making a barleywine. However, the brewers goofed and didn’t secure quite enough barley malt to complete the brew’s recipe. By the time they noticed the shortage, the rest of the recipe – including all the bittering hops – had been portioned into the kettle. To skimp on fermentable sugar at that point would have resulted in a hugely bitter, off-balance beer, so company owner Tony Magee directed his boys to take the van, hit up every supermarket in town and buy approximately 350 pounds of brown sugar. They followed the order, brought back the loot, dumped it in the pot, and finished the brew. As it fermented, the beer tasted awful, reports Magee, but toward the end of fermentation this brewing blunder abruptly took a turn for the better. The final product was a potent beer, sweet like candy, colored like whiskey, not quite as thick as a barleywine, and destined to become a favorite annual release. Brown Shugga’ usually runs 10 to 12 bucks for a six-pack – a splendid deal when you remember the beer is twice as strong as most others and three times as flavorful. The beer has been rated as a fine one to sip with expensive aged cheeses, but if your pants are anything like mine, you couldn’t keep cash in your holey pockets even if you had any. So skip cheese and swipe wild mushrooms for free. Brown Shugga’ works well with most edibles, though the anise-and-almond-scented species of the Agaricus genus complement the beer’s sweetness just perfectly. On the savory side, try a hot simmering stew of Chicken of the Woods to match with this hearty ale.

If you can’t find the 2008 release of Brown Shugga’ – for it may be dwindling – a solution is on the shelves already: Olde Gnarley Wine. This beer, in fact, is the beer that Brown Shugga’ was supposed to be until the aforementioned sugar accident diverted it to its happy fate. Olde Gnarley Wine, like most Lagunitas beers, goes by a name that is almost as fantastic as the beer itself – but this beer’s a hard one to beat. It runs 11% ABV, is sweet and chewy, nutty and balanced, and contains no overbearing bitterness. Olde Gnarley Wine works well with The Prince and other sweet Agaricus species; try dunking the mushrooms in egg, then preparing them like French toast. Sliced porcinis also make a good match; brown them in a pan of olive oil, drizzle with balsamic vinegar, and wash down with the beer.

I want to thank you for this excellent read!! I absolutely loved every little bit of it. I’ve got you book-marked to look at new stuff you post… <a href=“https://www.totosafeguide.com” target=”_blank” title=“먹튀검증”>먹튀검증</a>