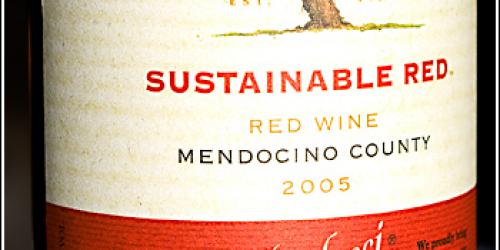 What is a sustainable wine if not one which will last forever? That is the question being asked by consumers who recently bought wines from a Mendocino County organic winery with the belief that the bottles would never run empty.

But two wines, a red and a white, from Parducci Wine Cellars in Ukiah, California have not lived up to their names, allege miffed buyers of the products.

“They say it’s ‘sustainable,’” complained Noah Peter, a San Francisco native who, confronted with what he believed was a never-ending bottle of red wine, made the $11 investment in the 2008 Parducci Sustainable Red at a local Whole Foods. “Well, we hadn’t poured more than five glasses before it was entirely gone.”

Alicia Young, a school psychologist for South San Francisco Unified School District who says she does her best “to be green,” bore similar sentiments.

“They might be saving forests with this wine, but it is it definitely, positively not a quote-unquote ‘sustainable wine’,” said Young, who tasted the Sustainable Red and reported that aromas of prune, jam and strawberry set the stage for a brilliant flavor parade of cherry, blackberry and chocolate. Young says she opened the wine while preparing for a dinner party at her apartment in San Francisco’s Tenderloin neighborhood.

“But before my first guest even got there the bottle was empty,” she says. “We had to go buy cheap stuff at the corner store.”

Peter said he tasted smoke in the Sustainable Red, perhaps attributable to the Syrah comprising 26% of the blend. Peter also reported licorice and pepper notes, descriptors often associated with Zinfandel, which constitutes 39% of the blend.

Parducci Wine Cellars’ Sustainable White, a 2006 blend of five grapes, carries a label that makes claims of sustainability identical to those of the Sustainable Red. Also like the Sustainable Red, the white has drawn criticism from drinkers who report that, while the $11 wine carries a lovely fragrance of pummelo and peaches and a tantalizing taste of summer stone fruits, a bottle may run empty after as little as three generous pours.

But the sustainability claims of Parducci Wine Cellars, which prides itself on environmentally conscious efforts like recycling and supporting local farms, may refer more to forest preservation than to bottles of wine. In a statement released March 2, the company’s executives assured that for every bottle of Sustainable Red and Sustainable White sold during the month of April, 2010, the company will donate $1 to American Forests tree planting projects. The wines can be found exclusively at Whole Foods, Safeway and Sprouts.

We are following your website posts. Please keep on posting and sharing great ideas.