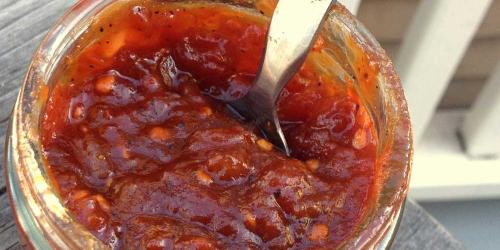 Never was there a food that captured this feeling like the tomato.

There’s this feeling I’ve been having a lot lately. During that perfect moment when the sun is setting behind me, the air is warm and the light is beautiful. I get it when I’m wrapped up in tight embrace with someone I really like, whom I know I’m not going to see for a while. And I get it when James jumps onto my lap for hugs and kisses; it’s a simultaneous realization that wonderful things are happening, yet time is not slowing down for them. It’s a strong desire to hold onto the specialness of each moment for just a little bit longer, before it slips away.

Never was there a food that captured this feeling like the tomato. Though, in this modern world, we have access to imported ones all year round, the local ones only really ripen to the full extent of their deliciousness in the summertime. We drizzle them with olive oil, tuck them into sandwiches with buffalo mozzarella and fresh basil, or just pop the tiny ones, whole, into our hungry mouths.

And then summer ends and they go away, and we are left with flavorless supermarket imports until the following year. So, in an effort hold on to the gloriousness of ripe summer tomatoes for just a little while longer this year, I am making this spicy jam. Jam is called “preserves,” after all—the idea being that it preserves fruit, long after its season.

Try this on grilled cheese (OMG), with french or sweet potato fries, dabbed on crostini with a thick smear of goat cheese, or drizzled over grilled meats. Do as I’m doing and make a big batch to eat year-round, and a little touch of summer magic will be right there in your refrigerator until next June.

How long do you think this would last in the fridge without being canned?

How do you know when to stop simmering…what is the consistency supposed to be like? Does it firm up in the fridge? I’m making it now and I’m not sure how much liquid should be left.

This.sounds.DIVINE! Will definitely try this one.

I am a total canning virgin but, as with most things, I’m diving in head first and this is where I REALY want to start. Do you think 20 minutes in a water bath would do it? And not that I doubt the BrokeAss Goddess, I can’t help but wonder if there’s enough acidity to make it safe to can, or is the sriracha helping out there? Am I over thinking this?

A friend and I have decided to process this recipe using a pressure-canner. I think we’re going to do it Sunday so I’ll post how we did it and how it turned out. I’m really excited. :)

SUCCESS! We canned this over the weekend using a pressure canner at 10lbs psi for 15 minutes. It is tasty but HOT stuff! But I’m also a light weight. Next time I make it I’m going to back off on the Siriacha a bit. I doubled the batch and ended up with 10 4oz jars.

OK, so this is my FINAL post, I promise. I wanted to toss in one more update. Today one of the processed jars was opened and nearly devoured in one sitting. While the jam still tastes wonderful, it’s not nearly as hot as it was before processing. It seems that the heat of the canner took the Sriracha from melt-your-face-off hot to pleasantly-spicy-with-a-little-kick. Now I am even more excited to make another batch. Thanks Gabi for another awesome recipe!

Plan to cook my brisket in this jam for The Rosh. Will let you know how it goes.

Now more than ever, lighting designers and architects are asking for products with minimalist designs allowing them to visually disappear, and when seen, look great, all while saving a bundle on energy costs.

The only way to SAFELY preserve this jam is to freeze it. It will last in the fridge for several months. If it gets moldy, throw it out. I will make it for sure and freeze mine. Thank you for the recipe.