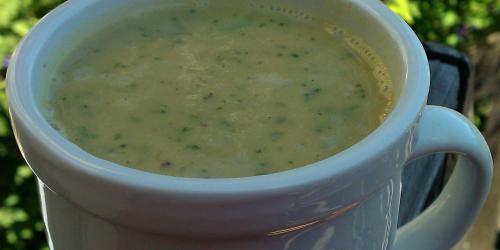 It seems like green peppers get no love. Everyone raves about perpetually trendy, sweet red bell peppers. They star in soups, dips and sauces, leaving their crunchy, slightly bitter ugly stepsibling, the green pepper, behind.

But this soup makes the most of green peppers. They, along with spicy green jalapeños, are roasted to sweet oblivion, peeled and pureed with garlic, onions, broth, a touch of half-and-half for creaminess and cilantro (or parsley, if you don’t like cilantro). Served hot or cold, this soup will change your mind about green peppers. Top it with a dollop of plain yogurt to tame its heat.

Note: If you’d prefer to keep the soup mild (or you’re serving it to children), leave out the jalapeños.

Roast the jalapeños and green bell peppers either over a gas burner or in the oven until charred. Under cool running water, carefully peel the skin off and rinse all peppers well. Use a knife to remove the stems and scrape out the seeds (though, if, like me, you like your food spicy, keep a few of the jalapeños’ seeds intact). Chop all peppers roughly and set aside.

Heat olive oil in a medium soup pan over medium heat. Add the onion and garlic and cook for 2 minutes, stirring occasionally, until onions are translucent and very fragrant. Add the jalapeños and bell peppers and cook for 3-4 minutes, stirring occasionally. Add the broth, stir well and cover pot. Turn the heat up to high, bring the mixture to a boil, then reduce to medium-low and simmer for 20 minutes.

Use a blender, food processor or immersion blender to puree the soup and return it to the pot. Stir in the half-and-half and cook for 1-2 minutes over medium heat. Season with salt and pepper to taste, stir in the cilantro (or parsley) and remove from heat.

If you want to serve the soup hot, serve it immediately. If you’re serving it cold, chill the soup in the refrigerator in a heat-proof bowl until cold. Serve garnished with yogurt and more chopped cilantro (or parsley) if desired. Another fun way to serve this soup chilled is to ladle it into hollowed-out green pepper halves.

OK, you are my idol. I am a dollar store fanatic. Mine has great produce and I use it to plan almost all my meals. I find lots of ways and new recipes to use lots of wierd stuff, and it certainly decreases my food budget and my friends never know what will be on the table. (i.e., KOBOCHA squash?….roasted in the oven and served over a wild green salad. Yum.)
Anyway, so happy there’s someone with taste out there that’s not afraid to use what’s cheap and plentiful. Yesterday the store had EIGHT bell peppers for 99 cents, and I have lots of cilantro in the garden, so a green golden globe party it will be.

Great recipe – I needed confirmation that my green bells would make good soup. Thinking of adding corn next time too.

Wow, that’s a really intense soup. Thanks for the recipe!

Thank you! Have been searching all afternoon for something to solve my overabundance of green and jalapeno peppers problem. Those red babies get all the attention! Going to make this right now. :)

I made this today to take care of my overabundance of CSA delivery peppers. Used a mix of bell peppers, yellow wax peppers, and both red and green jalapenos. Holy spicy soup, Batman! Wow! It’s delicious as heck, but I’m pretty sure I won’t be giving this to my five year old. Thanks for the great recipe! It saved my peppers from wasting away in the crisper drawer.

i love your site…but please add a pinterest pin option

My daughter came from a restaurant that had served her roasted green pepper soup. Having a lot of green peppers from the garden, I am going to prepare this soon. Thanks for a recipe like this.

Love this soup with some alterations. Not a dairy fan so left out the cream. Added some ground chicken for a bit more substance and topped it off with a little Parmesan. Yum!

Great recipe! Made a double batch with a couple alterations (a few Anaheim peppers instead of jalapenos and added hot and mild chili powder, cumin, frozen corn). Really tasty and great way to use up a boatload of green bells!

hay there if you want to get laid then you must hire our girls.

Excellent site. Lots of useful information here. I am sending it to several friends ans also sharing in delicious. And of course, thanks for your effort!

The call girls of Jodhpur have very fresh attitude to their life and they are very capable to do anything by their Jodhpur call girl services and at the same time they are available at very reasonable price list.
https://www.alishaoberoi.com/jodhpur-escort-service.html

The high profile Hyderabad call girls are well educated and have high cultural background. You will love interacting with them on different topics including sex. You can have their company in night clubs for dance. They are quickly excited and ready to engage in intimate wild sex.
http://www.elizarova.in

Our independent Jaipur escorts are fully trained and discover the best way to make men happy using their sexual services. We are the best in speed, as customers can see our website where the photos of the escorts are uploaded and we will choose them according to taste and demand.
http://www.jaipurnights.com/

The escort girls in Ahemadabad are extremely hardworking ladies and they manage each and every task in an absolutely professional way. The escort ladies in Ahemadabad train hard and hit the gym in order to stay fit and healthy.
https://www.kirtimodi.in

In case you can’t settle on a choice from different sexually engaging, enchanting, enticing Noida escorts will suitable for you, then don’t solidify, essentially call us or contact us by sending email.
https://www.ritikanoidaescorts.in

I had been Looking for this information a long time, here you share the messages, I’m very happy to see the perfect article. Awesome!
https://www.jaipurnights.com

You want the beautiful woman you’ve desired in magazines or lingerie and swimsuit catalogues and now suddenly they are in front of your eyes. So enjoy your trip with heavenly joys with Best Escort Services in Udaipur.
https://www.udaipurescortservice.com/

These stunning Goa Female Escorts have the options and appears that might create any sane and upright mango weak in knees. Having once seen them you’d naturally desire outlay time with them and this can be what they’re here for.
https://www.zahirra.in/