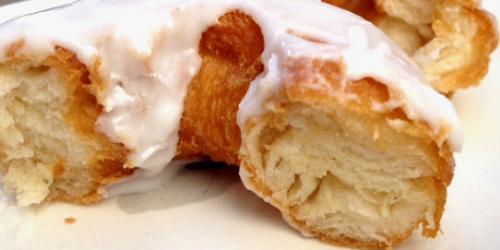 The world has gone crazy for Cronuts™.

If you happen to live under a rock, and don't know what a Cronut™ is, it's a hybrid croissant-doughnut, invented by the good people at the Dominique Ansel Bakery. It has led the people of New York (and every other city where other bakeries' takes on the cronut have begun popping up) going nuts with anticipation, waiting in line for hours (or paying this dude to wait for them), just to get that deep-fried, flaky, buttery, layered confection. Oh, and, they're being sold on the black market at a 700% mark-up.

Yes, these are pastries we're talking about.

I was inspired, when my friend Aimee told me last weekend that, in protest of the ridiculousness of the line-waiting and pastry-scalping, she tried to make Cronut™ herself at home. Sadly, her efforts to make croissant dough yielded something, in her words, "brick-like," not the light, flaky Cronuts™ of her dreams.

As she told me of her trials, it occurred to me that pre-made crescent dough (the kind sold in the tubes, made famous by a certain giggling, tiny man made of dough) might be a viable hack. Sure enough, it worked out beautifully.

I make these a little bit smaller than conventional Cronuts™ (slightly less guilt that way), and top them with a simple powdered sugar glaze, so you can really taste all the buttery goodness. Feel free to get creative with icings or other flavorings (melted dark chocolate Cronuts™, anyone?).

Skip the line, save money and impress your friends: make Kronuts (with a K!) at home!

**Note: When I originally posted this, I called my creations Cronuts, however, the folks from Dominique Ansel have requested I call them something else, so as not to cause confusion. So, I'm going with Kronuts.**